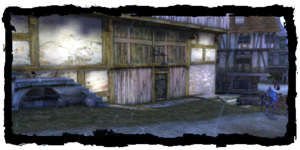 Manufaktura is located just east of Náměstí Jana Natalise, in the Obchodní čtvrť of Vizima. It is the newest weapons factory in all of Temerie apparently and produces more weapons than all the swordsmiths combined. However, their motto seems to be "cheap, fast and plenty", rather than workmanship. They produce swords, hatchets, armour and arrowheads, for the arbalesters of course, can not forget them!

When Geralt first enters the shop, he sees a number of tradesmen busily forging, overseen by their foreman. There is also an alchemist, toiling away at his bench in the back. Being the curious type, the witcher strikes up a conversation with the foreman which proves quite interesting. For instance, he learns that there are competing factions within the royal entourage and that at least one faction is stockpiling weapons. Hmmm...

The alchemist is also interesting to talk to, if a bit abrupt in his manner. He is a snob about alchymie, which he considers superstitious rubbish and its practitioners, notably Kalkstein, quacks. He thinks of himself as a scholar, not an alchymisté. He asserts that science alone will survive the test of time while magic and alchemy will disappear.

Our witcher is never one to let others run down his friends, so he defends his favourite alchemist and in the process manages to convince the "scientist" of the validity of Transmutace a metamorfózy and get a couple of handy books out of the deal: Samum and Tajemství mistrů jihu. He can also trade a piece of Meteority for a copy of Zerrikánská alchymie.