Nakonec tragicky zahyne rukou Adama, milence její sestry (ne jejího snoubence!), a stane se půlnočnicí. She argues about Julián with Alina and the argument spirals into manslaughter as Celina pushes her sister who hits her head on a rock as she falls and is killed. Adam is overcome with grief and anger when he learns of this and kills Celina to avenge his beloved.

Poor Alina also returns, as a Polednice, due to the circumstances of her death at the hands her sister. If only their love for each other was as great as their love of themselves, one wonders if this tale may have had a different ending...

As a Půlnočnice, she roams the pole at night until her spirit can be put to rest. Geralt can encounter her in that form several times, if he also wanders the fields at night. Each time, she laments her fate:

Then she attacks and must be killed. This continues to happen until her spirit is allowed to move on, which cannot happen without the Věneček z nesmrtelníku, which Geralt can get in return for completing a quest for the Poustevník.

Having been set free, she disappears. She does return, however, depending on choices made by Geralt regarding his path. If he chooses the neutrální, she appears, still as a Půlnočnice, to help him (or possibly fight him) in the Ledové pustiny. 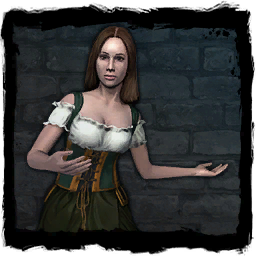